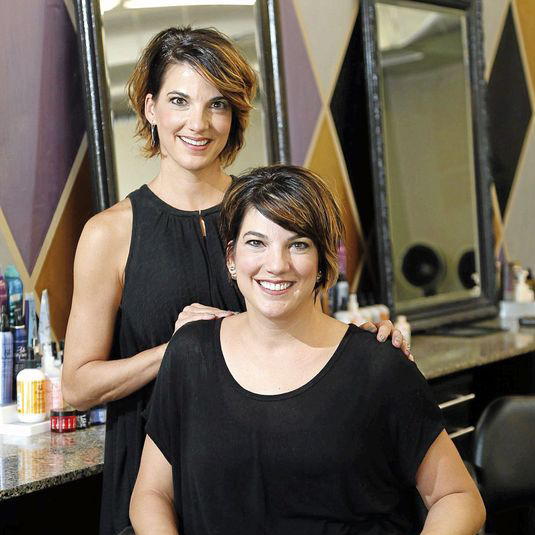 Identical twins Jane Huggins-Clayton and Julie Hudson, owners of Tulsa’s iidentity Salon (hence the “ii” in the name of their salon) were chosen as hair stylists by New York-based brand Bumble and Bumble to work shows during the iconic fashion event.

Being chosen was a huge honor for the sisters, who opened their salon in 2000 and have spent 15 years attending classes offered by the company and attending  Bumble and Bumble University to hone their hair-styling craft, Huggins-Clayton said.

“I can’t even describe it,” she said. “It’s surreal to think you are coming from a hairdresser persona in Oklahoma to backstage Fashion Week in New York City. It was the pinnacle of my hairdressing journey.”

This was their second attempt to be hired for the event. The first time, they were told to continue to “work on their craft” and return. The cream of the crop of professional hairstylists from across the country are chosen during auditions held in New York and Los Angeles. The final test involved styling and perfecting three foundation hairstyles in a specific amount of time, Huggins-Clayton said.

The number chosen to work backstage during NYFW depends on how many shows Bumble and Bumble has booked and how many stylists are needed to prep a specific number of models, she said. The sisters were among 12 “newbie” stylists chosen by the company.

Hudson explained how it works backstage. The fashion designer creates a look for his or her show. Each model is prepped and has a Polaroid photo taken showing how their look fits the clothing and the era they are trying to portray.

“One was an androgynous, multicultural look, a sort of  anybody-can-wear-any-style type,” Hudson said. “We did one show that was very ’80s inspired with lots of zig-zag parts. Another one had a ’90s look inspired by the TV show ‘Friends,’ which had Phoebe- and Monica-type  characters.”

The sisters styled hair for the shows of Thom Browne, Hood by Air, Karen Walker, Gypsy Sport and Collina Strada during their week in New York.

Hudson said being well-educated in the techniques and use of the products is essential at fashion shows.

“When you’re in a time crunch, you have to know exactly what to do and how to stay calm. All the education and all the classes that we have in salon and attend — all those thousand little bits and tricks that you learn prepare you for something like this.”

Natives of Muskogee, the sisters went to cosmetology school together and created their salon because they didn’t want to do “cookie-cutter hairstyles.”

“We really just wanted to get as much information and education from everybody and then you create from behind your chair,” said Hudson, who heads back to New York City with her sister for the mid-winter New York Fashion Week in February. “That is where ‘iidentity’ came from.” 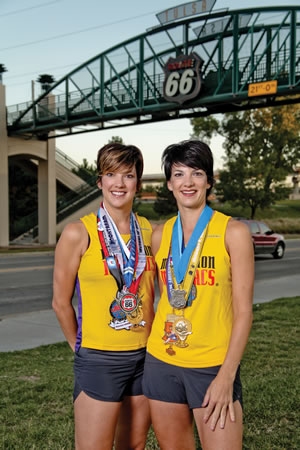 Julie Hudson and Jane Huggins have competed in multiple running events, including 14 marathons, and are training for this month’s Route 66 Marathon.

Identical twins Jane Huggins and Julie Hudson know what it takes to run a business — and a marathon. The co-owners of iidentity Salon on Brookside apply their business principles while hitting the pavement, training for the upcoming Route 66 Marathon, which takes place Nov. 20.

“Running is like building a business,” Hudson says. “It takes persistence, dedication and hard work. As a stylist, your clientele isn’t built overnight, and training for a marathon doesn’t happen that way either.”

Competitive by nature, Hudson and Huggins ran track in high school, followed by sporadic running before resuming their passion for the sport. Somewhere in between — spring/prom season of 2000, to be exact — they opened iidentity Salon.

“We were inspired to open our own salon because we wanted a comfortable environment with excellent customer service, all while providing the most modern, new looks from magazines and runway shows to our clients right here in Tulsa,” Huggins says.

While they worked on their business, their families grew as well. After giving birth to her daughter in 1998, Hudson decided to start running again to get back in shape and found that entering races was a great motivator.

“I realized if I didn’t set a goal, like a 5K run or the Tulsa Run, I was not as motivated to get out and run,” she says. “My running accomplishments came from setting a goal to run a marathon and actually getting to the start months later.”

Huggins began running with her sister to get in shape. Amid the demands of life, the two have found psychological benefits to running, in addition to the physical benefits.

“As our business has grown, the stress of a growing, thriving business and families has led us to the road more and more often,” Huggins says. “Running is a huge stress reliever for us.”

Both have competed in numerous 5K runs and half-marathons, as well as 14 full marathons.

“One marathon I quit and rode the bus at mile 16,” Hudson says. “I learned a lot from this; quitting doesn’t feel good.”

One way to ensure that she doesn’t hitch any more bus rides to the finish line is through proper preparation. Huggins and Hudson have been training with Fleet Feet Sports Tulsa, an athletic shoe store and group training program for walkers and runners of all levels, for the past four years.

“We first ran onto the knowledge of Fleet Feet — literally,” Huggins says. “ … We had been training on our own and had participated in about three marathons when we were running the OKC (Memorial) Marathon for the second time.

“Their pace coaches and groups of runners would pass us on the course. Being friendly, they would ask us to join them or come by the store to find out about running with them.

“After the embarrassment of being passed by them twice, we decided to check them out. We joined the marathon program, which consists of weekly group runs and Saturday group long runs. The support and knowledge of their friendly staff and coaches make this a no-brainer.”

Hudson says she’s looking forward to the Route 66 Marathon because she can actually train on the course on which she will compete, alongside her regular running partners.

“Fleet Feet has built an amazing running community to help all meet their running goals, from 5Ks to marathons,” Hudson says. “Just like a small business of hairdressers, my sister and I think working as a creative team helps inspire. You get better results and everyone ends up learning. It’s so much easier to accomplish your goals if you are with like-minded people with goals.”

In the spirit of inspiration, the twins encourage their stylists to participate in running events by paying their entry fees (usually a donation to a charity) and by providing iidentity Salon team running jerseys.

Their passion for running even crosses over into serving the community. From 2000 to 2008, when the Tulsa Run route passed in front of their salon, and now for the current Route 66 Marathon route, Hudson and Huggins provided, and still provide, a water station for participants. Stylists at iidentity volunteer their time by manning the water station.

“The benefits are endless for us, our employees and the community,” Huggins says. “Running our local races means everything to us. The Route 66 Marathon is one spectacular event. It involves our local community, our running groups, our clients and also gives back to Tulsa.

“Just volunteering for the Tulsa Run for so many years, as a group event for our salon, has introduced the sport of running, the feel-good benefits of giving back and the community of teamwork to all who participate.”

Twins and Iidentity Salon co-owners Julie Hudson and Jane Huggins require all of their stylists to go through an apprenticeship program to familiarize themselves with the salon’s clients and how the business operates, and to encourage their creativity. “We don’t just crank out a haircut,” says Julie. “We look at each individual and then go from there. As long as the haircut looks good at the end, it doesn’t matter exactly how they got there.”

The salon, which opened in 2000, has a modern eclectic decor featuring big diamonds painted on the walls in purple, copper, silver and brown and chandeliers over each station. Popular services include foils, cuts and styles, blow-outs and the house specialty—razor-cutting using a straight razor with no guard. According to Julie, the salon attracts a wide range of male and female patrons who want a change and, like the name implies, who are ready for a new identity.